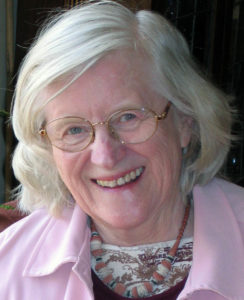 Janice Dolley BA is an educator who, combining a career with raising four daughters, worked as a lecturer at the Open University for its first 30 years in Social Sciences, Community Education, and Training and Development. This included chairing course teams (K 502 People and Potential and Clinical Supervision), directing national government funded programmes for unemployed people in the UK and Northern Ireland, leading a Trainer Training programme and setting up a Network of Community Learning Groups across the UK as well as in parts of Europe. After official retirement she worked for fifteen years as the Development Director of the Wrekin Trust, a charity for spiritual education set up by Sir George Trevelyan.

As a writer she has published ‘Christian Evolution: Moving towards a Global Spirituality’ with Ursula Burton, ‘The Quest: Exploring a Sense of Soul’ with Joycelin Dawes and Ike Isaacson and ‘Awakening to a New Reality: Conscious Conversations across the Horizon of Death’ with Ursula Burton after her death, with its key message of the continuity of consciousness after death.

She has been a trustee of the Findhorn Foundation and Findhorn College, Wyse International, Wessex Foundation, and Coach House, Kilmuir Retreat Centre in Scotland as well as an elected member of the Reigate Borough Council and governor of many different schools and centres of Adult Education.

As an initiator for fifty years she has been building bridges from the dominant paradigm of materialism and separation towards an emerging New Story of the deep interconnectedness of all life. This included working with others to set up Bridge Farming Enterprises, one of the first community run organic farms in England in the early 1970s, and The Bridge Educational Trust, its associated pioneering charity for holistic education and environmental care.

Currently she is a core team member of the Whole Worldview and Unity Community, Cana (Christians Awakening to a New Awareness) which is holding Conscious conversations on the evolving edge of religion towards a more universal spirituality and the One Spirit Alliance, all working in different ways towards co-creating a new reality for our time.